Any golfer worth his salt will tell you that the most invaluable skill you have on the golf course is not driving the ball halfway down the fairway, it’s honing your short game. The short game is where people become unstuck, they can be left putting and chipping for hours, racking up scores and increasing your handicap.

A chipper and a putter are not so different, however, a chipper is lofted about 30 to 37 degrees, the same as 7- and 8-irons. With a chipper, you can hit the ball with a putter’s swing.

It is recommended that golfers with a high or mid-range handicap should use chippers, especially if the golfer has difficulty using wedges or short irons. A chipper is an easy way of shunting the ball up to the hole.

But what are the best chippers to buy for a new golfer? What distinctive features does a chipper have that marks it out as a great piece of golfing equipment? How much money will a decent chipper be looking to set you back?

Well, for all you golfers out there asking yourselves these questions, help is at hand! We’ve compiled a list of some of the very best chippers currently available on the golfing market.

In a hurry?
This is our Winner!

First off, we have a chipper made by Wilson, a golfing brand with over 100 years of experience, they have manufactured clubs that have led golfers to victory in the US Open, the PGA Championship and various other tournaments. Coming in as our top favorite chipper is the Wilson Men’s Harmonized Golf Chipper.

At 35-inches in length, this club has a vice-like grip which allows the user to choke up or down depending on their height and hand preference. The head of the club has been molded in the style of a blade putter, mixed with the weighted feel of a mallet.

Expert golfers will notice that the head of the club has been rounded and extended, with three lines on the back to help align the club. If it’s accuracy you’re looking for, then this putter-style chipper is the one for you.

This one should be wielded with a putter’s stroke to maximize accuracy, it can be used from up to a distance of 40 yards - this club is a mean one that swings just like an 8-iron. 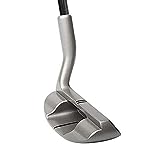 Next up is a very unique-looking chipper with a four-way chamber that will help you lob the ball out of the rough - the True Ace Assembled Golf Chipper.

It has a 35-degree angle and loft, it gives golfers a putter-like feel that mimics a 7-iron, allowing for bump and run shots and short chips on a much flatter surface.

This club has a lot of control and forgiveness with a cavity in the back and weights in the heel and in the toe. With a centrally-aligned shot, you can scoop this one out of the thick grass in one clean shot.

Alignment is made incredibly easy by markers on the head of the club, and you won’t have to worry about the ball sliding underneath and leaving it short of your intended landing. With this club, all you’ll need to focus on is your distance control and swinging. 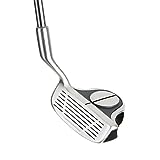 Next is a club that has specifically-designed versions for men and women, so here we’re going to talk about it in more general terms. Built as a mallet-style chipping putter, it has many features to enhance alignment and speed of chipping - it’s the Intech Golf EZ Roll Chipper.

The raised alignment line is cut into a ‘one-ball’ design behind the face of the club, this increases the accuracy, especially for those golfers accustomed to mallet-type putters. It has been described by users as having the substance of a single-ball putter but with the enlarged face of an 8-iron.

This club has what is called a Goose Neck style of the neck and hosel, which those inner hosel shank shots that can be very embarrassing when experienced out on the green. The 35-inch shaft is connected to the clubhead, with a lower face angle of 35-degrees.

Now we move onto a more dynamic club that features two faces for ease of chipping, especially when the golfer finds himself having to adopt an awkward stance to accommodate for tricky terrain - presenting the Intech Gold Approach Two-Way Chipper.

One of the first things that will strike you about this club is the dual faces, which is illegal in certain tournaments, probably because its ability to navigate the ball through dense grasses and sandtraps is seen as giving the golfer an unfair advantage.

Coming in at the same length of most putters - 35-inches - the clubhead is also lofted like a 6-iron at 35-degrees. This is the ideal club for golfers with a high handicap who aren’t interested in tournaments, just preferring to enjoy the odd game on the green with friends 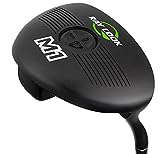 Our next choice is a very popular brand of golf club manufacturer. Ray Cook are renowned for their world-class putters and wedges, and this chipper is no different. Bearing certain stylistic similarities to the Ray Cook M1 Putter, but with a slight change in the sole - it’s the Ray Cook Extreme Aim Chipper.

The Extreme Aim Chipper has a 37-degree loft and a 70 lie, which will allow the average golfer to have the base of their clubhead firm to the ground as if they were putting. It will give you added flexibility when getting it out of the rough, more so than other chippers.

With a thinner hosel than usual, it provides the Ray Cook Extreme Aim Chipper with an excellent clubhead balance and a bright yellow alignment channel, which will make linear chip shots an easy task.

Featuring another 35-inch shaft, this club is made from rust-resistant stainless steel, making it a club that you can use in all weather conditions. 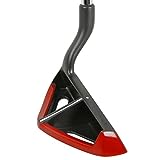 Finally, we have a club that looks not unlike a fighter jet. The manufacturer PowerBilt has opted for something a little different in terms of design, with a bright red triangular clubhead that makes for a very lightweight chipper - it’s the PowerBilt Golf TPS Bump & Run Chipper.

With a smaller sole and a Gooseneck hosel, this club is specifically designed for bump and run shots - this is when the shot is taken from the edge of the green and is hit in such a way that it spends the minimum amount of time in the air before rolling towards the hole.

The TPS is a very small club, it’s V-shaped head reducing the likelihood of shanks and mishits to almost none. This chipper has a very low face angle of 32-degrees, again, this keeps the golf ball low to the ground, allowing it to roll gently into the hole.

A chipper is a very unique style of golf club, with a high lofted face, it bears a lot of resemblance to putters such as 7- and 8-irons. Most chippers have a decent lie angle, bringing it very close to the ground and enabling you to hit the ball a lot easier than a high-lofted iron or a wedge.

Chippers should be purchased by relative golf newcomers who have difficulty driving a ball up to the hole with a standard wedge or a short iron. Also, players who apply too much loft to their chipping, have trouble controlling their ball distance or have contact issues with their usual wedges will have a lot to gain from owning a decent chipper.

Many different manufacturers tailor their chippers in different ways, but ultimately all chippers should be designed for increased loft and greater accuracy using a wide variety of alignments indented or marked on the clubhead.

Suited as they are to people with high handicaps, amateurs might want to consider price over features if they are unwilling to spend a few hundred dollars on a chipper they might only occasionally use. Thankfully, there are plenty of well-priced chippers in our list above that will mean that you can pick one that you feel has enough features for you to increase your short game.

Ideally, you’ll want a versatile chipper that will help you get out of the rough, but if you’ve already played a few games, you might have already realized that you might not need a chipper at all.

In What Situations Is A Chipper Illegal?

Going by the standards outlined by the United States Golf Association (USGA), a chipper is considered legal as it is technically an iron. But to carry a chipper, it cannot have a putter grip, also two-way chippers are completely disqualified.

You can use a two-way chipper for practicing, but it would be worth phasing it out of your bag at some point, simply because you won’t be able to apply the same amount of versatility when it comes to stance with single-way clubs.

If you are caught using a two-way chipper in a tournament, you will be automatically disqualified. If you’re playing as part of a team, then the whole team will be booted from the tournament - so make sure that chipper is out of your bag before getting out onto the green!

What Is Better: A Chipper Or A Wedge?

Wedges and chippers are used for the same thing, but they are very distinct clubs with many separate features unique to one but not the other. Wedges traditionally come at a 40 to 60-degree angle, whilst a chipper comes in much lower at around 30 to 37 degrees.

Like insects or fish in the ocean, wedges come in many different species: pitching wedge, lob wedges, sand wedges and gap wedges. Each one of these wedges has a different degree angle that will help you achieve varying lofts.

Wedges are meant for shots within 130 yards, with blade-like heads and faces, golfers can hit the ball at a full-swing, half-swing or a short swing.

Wedges can drive the ball from a low-to-the-ground shot such as a deep rough or the bottom of a hill beneath the hole in which a high degree of loft is required. Chippers share more in common with a putter than a wedge and golfers should use a putting stroke as opposed to a full-swing when using one.

Chippers are meant to achieve the same ends as a wedge via different means, a chipper won’t have to dig into the ground like a wedge, being more forgiving, it can make it much easier to hit the ball.

We hope our list of chippers has helped you decide whether or not you’re going to need one of the green. Happy golfing!