It’s well known that in golf, your equipment really can make all the difference. And as technology advances, this becomes more notable still.

Much has been said about rangefinders and how much they can help the game. But who wants to carry around a rangefinder if you can get the same functionality - and a lot more - from a smaller gadget that you wear right on your wrist.

So you can get some good GPS golf watches and some good smartwatches, but why not ensure you get the best of both worlds, with a smartwatch with GPS for golf. Get yourself a fantastic golf aid that you can wear on your wrist as you play AND a fully functioning smartwatch for all your important notifications, like texts and emails etc.

And here’s a spoiler for you - they’re both great.

However, there’s no call to buy one of each! So if you’re thinking of going for one of these watches, you may need some help to decide which of the two might be the best for you.

Don’t worry - that’s where we come in.

In this article, we’re going to go through why the Garmin Approach series makes a good choice for a smartwatch for golf, then we’ll take an in-depth look at these two watches, then we’ll summarize the main differences, before finishing with a wrap-up, where we try to come to a conclusion (it’s ok, you can scroll ahead if you like).

The Garmin Approach S60 comes preloaded with over 40,000 golf courses from the world over. These are all in full color, which you can view from the watch face.

I know what you’re thinking. Will I be able to view it when the sun’s on it when I’m playing?

Well the answer to that is a resounding yes. The watch face can be read even in direct sunlight. Of course being a watch rather than a handheld GPS system, the picture is a little smaller, but it’s not too bad, at 1.2 inches diameter. And it gives a very precise image too, thanks to it’s high resolution screen.

And speaking of GPS, a signal is given off from the S60, and from it, the watch can determine the precise distances to each location on the course, and very importantly, to the flag.

The S60 takes this one step further however. It has a PlaysLike Distance feature. This feature accounts for elevation changes on the course and automatically adjusts the given yardages to account for uphill and downhill shots. (Cool.)

It also has a nice Green View feature which gives you a great birds eye view of the entire area.

It’s also very handy when it comes to blind spots and hazards. There’s the Touch Targeting function, which lets you touch any point on the map for a precise measurement to that exact spot, whether it’s the fairway, water hazards, or sand traps, and so on.

And if you find yourself stuck in a blind spot, there's a nifty PinPointer function, which shows you the direction to the pin!

With all that function, you might be wondering whether the watch’s battery will be able to keep up with everything that’s going on. Well, the good news is that there’s plenty of battery life. Enough in fact for two whole rounds, plus over an hour or so of practice.

But where it really comes into its own is when you pair it up with the Garmin TruSwing golf swing analyzer. The Garmin TruSwing is a small device that connects to your club shaft. It collects various different key swing metrics including swing speed, swing path, swing tempo, and club head angles at impact. It’s a great tool for getting consistency in your swing.

If you’ve remembered to set up Autoshot on the watch before the match, then when you get home, you’ll find that all your various distances were recorded during the game. So it’s also really good for post game analysis and study.

But it’s not just a golf watch - it has all that functionality we like to get from our smartwatches too. Once it’s in the bluetooth range of your smartphone, you can get all the notifications you could want right there on your wrist. Incoming calls, texts, emails, the lot. You need never be afraid of missing anything or being the last to know.

You can get it with different styles of watch strap. There’s the silicon version which is available in both black and white. Or you can opt for a black leather band instead. 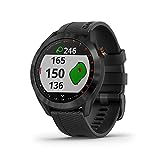 As you might imagine the S40 has quite a lot in common with the S60.

But there is one feature on the S40 that S60 does not have.

With the S40, you can pair it up with CT10 club trackers.  These are special trackers which you screw into the grip of each club and they will let you know how far you hit with each club and how close you are to the fairway or green.  It offers far more precise tracking than if you were relying on GPS alone.

And this is a very handy and useful feature sure, but it’s not quite as fancy as Garmin TruSwing.

Garmin has actually been around longer than you may have thought.  They started off as far back as 1989, specializing in GPS technology.  And they have flourished.

And while their various GPS gadgets are still the very best on the market to this day, it’s been very nice to see them branching out into wearables.  Including the likes of fitness trackers and smartwatches.  These are watches that can compete on a fair footing with the likes of Fitbit and Apple smartwatches.

But their remit goes a little beyond that.  They’ve actually established an online community, via Garmin Connect™ where you can share your golfing (and other fitness) experiences and challenge your friends to compete with you.

Why we like the Garmin Approach series of watches

When you’re looking to buy a smartwatch for golf, the Garmin Approach series basically ticks all the boxes (unless you’re interested in the budget watch variety).  It’s not just about the brand name.  It’s also about a number of other different factors.  This includes the strength of the GPS signal, access to golf course maps, a decent battery life, and of course, your yardages.

So if you want your Garmin watch to be paired up with a phone you already own, we recommend that you look into it to see which watch is compatible.

Summary of the Main Differences

One of the most stark differences between these two great watches has to be the price difference.  This list price for the S40 is usually down as much as $100 from the price of the S60.

The S60 clearly has more features than the S40, namely PlaysLike Distance, and PinPointer.  And these are fantastic features, ones that make the asking price so worthwhile if you can afford it.

And while on the face of it, S60 has more features for your golf game than the S40, the S40 does actually have some clear advantages besides the more affordable price tag.  Namely the considerably longer battery life.

So, now that we’ve gone through the different features of both watches, and summarised their differences, you should now have a really good idea of what they have to offer and how much potential they have to really up your game.

If you have the budget for the S60, then you should go for it - it’s a clear winner in terms the number of features that can help with your golf game.  If however you want to keep some money for some other golf equipment, then the Garmin Approach S40 is also an excellent choice.